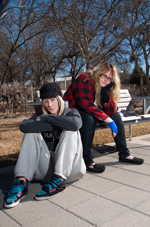 When you think of a homeless person do you picture an old man with a paper bag, clutched tightly in his hand, draped across a park bench? Do you envision a middle-aged woman with the leathery skin of a smoker and a vacant look in her eyes? Today, most individuals are aware that homeless people can look just like they do and attend school or work. So, what does it really mean to be homeless? One Collin College professor believes the best way to understand homelessness is to experience it.

Students in Dr. John Glass’ sociology classes can participate in a homeless simulation and replace their preconceived notions of homelessness with first-hand knowledge. Dr. Glass initiated the project because he was genuinely surprised at his personal reaction during a worldwide homeless simulation.

“I toured the ‘urban slum,’ and I could see how if I had to raise my kids in this setting I would steal. I would do whatever I had to do to survive. I never had that experience before.”

Ashleigh Archer previously worked with homeless teenagers. After walking around the campus on a chilly afternoon she decided she would bring blankets to those teenagers.

“They do it every hour of the day. They don't have an address or internet access. This was a very good exercise. It was a very humbling experience. People don't want to look at you, but one man made my day. He offered me money and said he would help me find a job. It amazed me.”

Carolyn Egan took her sign, “I slept in the woods,” to heart and dressed accordingly in ripped jeans, a t-shirt and an over-sized jacket.

“One girl said, ‘I have this soup. Would you like it?’ All of a sudden I had food in my hands. She almost gave me a hug but then realized I was probably dirty. What a sweet person. Another person approached me and said, ‘After my class I’ll find you and get socks from my car. One guy walked up to me and said, ‘So you slept in the woods last night. It is pretty cold outside.’ He told me he was homeless twice in his life.”

Dr. Glass hopes his students will come to the conclusion that we do not create the world in which we are born, but we can still impact it.

“Some of it is the luck of the draw. Those of us born in the U.S. have a different situation than those born in certain places in Africa. That affects our health and how many kids we have.”

The Collin College students who participated in the project would be the first to admit that a simulation of homelessness only gives a momentary glimpse of a possible reality of homelessness. But, in a day, they learned a substantial amount about themselves and the people around them.

“Before, I treated homeless people horribly. I turned and looked the other way because I was afraid of them. I am so glad I did this simulation,” Egan said.

Reprinted with permission by Allen Image