All campuses are open and ready to serve students virtually, blended, or in person.
View College COVID-19 Information 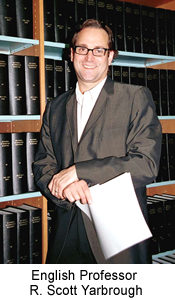 MAY 1, 2001 -- Collin County Community College District (CCCCD) English Professor R. Scott Yarbrough has been selected a 2001 Piper Professor. This honor is presented annually to professors for superior teaching at a Texas college or university by the Minnie Stevens Piper Foundation. "Receiving the Piper award is a bit overwhelming, since I have only been at Collin County Community College for about two years. I did not expect something like this to happen so fast," said Yarbrough.

Coming from a family that is dedicated to teaching (his parents have amassed over 72 years of experience in the field), Yarbrough chose education as his lifelong career and excels as a college instructor and leader. He was voted CCCCD Outstanding Professor of the Year (2000-2001) by his peers. He is editor of Forces, CCCCD's literary magazine of the arts, and he serves as the college's creative writing sponsor. This multitalented professor is also an artist and musician and published poet and playwright.

"We applaud Scott for being recognized as one of the best professors in the state of Texas," said Cary A. Israel, CCCCD president. "Scott's dedication as an educator, enthusiasm in classes and expertise of his subject area exemplify the quality of instruction we have at Collin County Community College. His innovative techniques inspire and challenge students to extend themselves intellectually and creatively, to improve their communication skills and to contribute to their communities. Scott is indeed worthy of the Piper distinction."

Prior to joining CCCCD in 1998, Yarbrough was a professor of English at South Plains College in Levelland, Texas, where he was awarded the district-wide 1997 Excellence in Teaching Award.

Yarbrough is one of 15 professors statewide to be honored as a 2001 Piper Professor and the fourth Piper Professor to have taught at CCCCD. Nominations were judged by a selection committee comprised of representatives from the academic community.

Among the accolades CCCCD has received in the 2000-2001 academic year: Theater Professor Brad Baker was awarded U.S. Professor of the Year for outstanding instruction by the Carnegie Foundation for the Advancement of Teaching, the Council for Advancement and Support of Education (CASE) and USA Today; the Service Learning and Learning Communities program was presented the national Bellwether Award for innovative practices by the National Council of Instructional Administrators and the Institute of Higher Education at the University of Florida; and CCCCD student Thomas Doan was one of 20 students in the nation to be named to the All-USA Academic Team by Phi Theta Kappa, the international honorary society.

Collin College serves more than 46,000 credit and continuing education students annually and offers more than 100 degree and certificate programs. The only public college in the county, Collin College is a partner to business, government and industry, providing customized training and work force development.