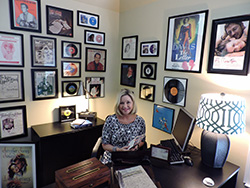 Dr. Dallie Clark, a humanities professor at Collin College, has collected many pieces of art inspired by handwritten letters.
Photo by Lawrence Bassuk
Sept. 10, 2015 – Collin College recently named Dr. Dallie Clark, a humanities professor, to its Lebrecht Endowed Chair for Scholarly and Civic Engagement.  Dr. Clark will use her time as chair to create an interactive museum exhibit and short documentary about “The Letter as Art in the Digital Age.”

Dr. Clark began her teaching career at Collin College as an adjunct faculty member in 1999 before becoming a full-time professor in 2005. She holds a doctorate in humanities from The University of Texas at Dallas (UTD), a master’s degree from Southern Methodist University, and a bachelor’s degree from the University of South Alabama.

Dr. Clark is an advisory board member for the School of Arts & Humanities at UTD as well as for the Arts Incubator of Richardson.  Additionally, she directs the "Passport to the World" Cultural Connections Program at Collin College and is the past president of the Community College Humanities Association's Southwestern Division. Dr. Clark has published numerous articles and interviews and is the author of the 2012 poetry collection, Pink.

“The Letter as Art in the Digital Age,” an outgrowth of Dr. Clark's doctoral dissertation at UTD, will focus on handwritten communication, the qualities that can elevate a simple letter to art, and the ways that the art form might continue in a world of instantaneous communication.   Although the concept will continue to evolve, Dr. Clark envisions a mobile art exhibition and short documentary film that will showcase various aesthetic aspects of the handwritten letter as well as the many art forms inspired by them.  After its initial debut, she hopes to display the exhibit in other public venues.

Dr. Clark will be seeking community partners to help bring the project to fruition, both as interview subjects to discuss how letters have changed their lives, and as artists to contribute to the collection of letter-related artwork. For more information on the project and how you can be a part of it, contact Dr. Clark at  dclark@collin.edu .

The Lebrecht Endowed Chair for Scholarly and Civic Engagement was established to recognize Royden L. Lebrecht's commitment to education and the community. Lebrecht supported a number of charitable and civic organizations and believed that education created opportunity. Lebrecht’s $1 million gift was the largest from an individual philanthropist in the history of Collin College at that time.

Lebrecht was born in Denison, Texas, and attended the University of North Texas. He served as a major during World War II as a pilot in some of the most dangerous missions. Lebrecht built many successful business ventures in Tucson, Ariz., and became a noted real estate entrepreneur.

Collin College serves nearly 52,000 credit and continuing education students annually and offers more than 100 degrees and certificates. The only public college in the county, Collin College is a partner to business, government and industry, providing customized training and workforce development.