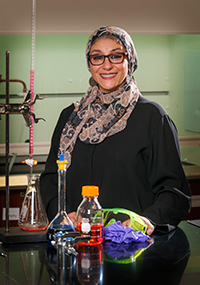 “Collin College is thrilled that Dr. El-Ashmawy is being honored for her excellence in teaching,” said Dr. J. Robert Collins, chair of the college’s Board of Trustees. “She is an exceptional educator who dedicates herself fully to others.”

The Professor of the Year program, now in its 35th year, is the only national initiative that focuses solely on excellent undergraduate teaching and mentoring. Dr. El-Ashmawy accepted the award at a Washington, D.C. ceremony in the Ronald Reagan Building and International Trade Center. CASE and Carnegie also honored Professor El-Ashmawy at a congressional reception at the Folger Shakespeare Library on Capitol Hill.

According to Collin College District President Dr. H. Neil Matkin, “Dr. El-Ashmawy is an extraordinary professor who works tirelessly to empower students. With more than 1.5 million professors in the United States, she is literally one-in-a-million and a perfect representative of the quality faculty at Collin College.”

The college is now home to four U.S. and four Texas Professors of the Year. Collin College has also won more Carnegie Professor of the Year accolades than Cornell, Northwestern, Vanderbilt, Johns Hopkins, Georgetown, Rice, Texas Christian University and The University of Texas at Austin.

Professor El-Ashmawy said she is honored to have been recognized nationally. She said it is a privilege to be one of the eight Collin College professors who have been named Carnegie Professors of the Year.

“It’s always a great honor to receive acknowledgement of my achievements, but the greatest gift is when I can use my strengths to serve those around me,” El-Ashmawy said. “When my students see how chemistry impacts everyday life and why chemistry is so important to society, those transformations are precisely what drive me every day as I walk into the classroom.”

Dr. El-Ashmawy’s family moved to the U.S. from Egypt when she was eight so her mother could conduct medical research with a team in Dallas. With double doctorates each, her parents took education very seriously. Young Amina was in the fourth grade and only spoke Arabic and French at the time. Even though she was separated from everything familiar, including her twin brother who her school placed in a separate classroom, she quickly learned English, and by fifth grade, she was the best student in her class. In fact, her passion for science as a child led her to the teaching profession as an adult.

“When I was a youngster in Egypt, my mother called me ‘Mademoiselle Deroose,’ which means ‘Miss Lessons’ or ‘Tutor.’ I’m not sure if it was intentional, but this planted a seed,” she said.

Outside of the classroom, she is a published author with multiple journal articles and textbook credits to her name, including a chapter in the upcoming “Sputnik to Smartphones: A Half-Century of Chemical Education.” She also distinguished herself as a trusted adviser in her field through her leadership in the American Chemical Society. On campus, she chaired the Faculty Council twice, chaired her department, served as the college’s liaison to the State of Texas on college readiness, advises student organizations, publishes and presents regularly, serves on countless task forces and mentors at-risk students. For her dedication to teaching, as well as outstanding academic, scientific and scholarly achievement, Dr. El-Ashmawy was one of 10 Texas professors to be named a Minnie Stevens Piper Professor in 2015.

“I am often asked why I am at a community college and not somewhere else in higher education,” El-Ashmawy said. “My answer is, students. I greatly enjoy interacting with students and helping shape their future. Community college is where I believe I can maximize such interactions. Collin College is a remarkable community college that has phenomenal academic tradition and culture of innovation. I am very proud to be part of such an incredible institution of higher learning.”

Collin College serves nearly 52,000 credit and continuing education students annually and offers more than 100 degrees and certificates in a wide range of disciplines. The only public college in the county, Collin College is a partner to business, government and industry, providing customized training and work force development. In addition, the college operates the Collin Higher Education Center, which serves 3,300 additional students each year in partnership with The University of Texas at Dallas, Texas Woman’s University, Texas A&M Commerce, Texas Tech and the University of North Texas.