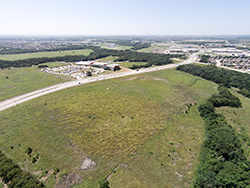 For aerial video footage,
visit https://youtu.be/e4V-X8CzwrA
June 28, 2016 - Tonight, the Collin College Board of Trustees announced plans to build a new campus in Wylie on 43.68 acres donated by the city of Wylie. The trustees also agreed to build centers in Celina and Farmersville.

The new campus will be located adjacent to Wylie City Hall on Country Club Road just north of FM 544. College leaders plan to break ground on the three-building, 415,000-square-foot Wylie campus within three years. When the campus opens in 2020, it will have the capacity for 7,500 students.

“We are very excited to be establishing a new campus in Wylie and to be making higher education more convenient for southeastern Collin County,” said Dr. Bob Collins, who chairs the Collin College Board of Trustees. “Wylie community leaders, including both city and school district, have been great partners in enabling this project to move forward.  Without their help, cooperation and persistence we couldn’t have made this possible.”

Tuesday night, the Wylie City Council formally approved the land donation for the project during their council meeting.

“We are extremely pleased and proud that Wylie will be the site of the newest Collin College campus expanding the educational opportunities for students, not just from Wylie, but for miles around,” said Wylie Mayor Eric Hogue. “This partnership has been years in the making, and I applaud the board’s leadership in planning for the needs of future generations. We welcome Collin College to the Wylie family; we know this campus will be the jewel in the Collin College crown.”

Collin County is estimated to reach a population of about 2.4 million residents by 2040, and the booming residential and commercial growth has put pressure on the local labor market for more college credentials. In 2015, the college’s trustees began a long-range master planning process that included in-depth studies on demographics, educational statistics, labor market demand, community impact and academic program opportunities.

According to Collin College District President Dr. Neil Matkin, “Our community needs this expansion, and it will be a significant milestone in the college’s new master plan. Collin College can deliver the top-quality college education for the lowest tuition in the state. This is a spectacular point in North Texas history, and the board is very excited to expand and reach students throughout our service area.”

Collin College’s service area includes Collin County, Rockwall County and the city of The Colony. Currently, the college has seven locations—one in Allen, two in McKinney, one in Frisco, two in Plano and one in Rockwall.

Collin College serves nearly 52,000 credit and continuing education students annually and offers more than 100 degrees and certificates. The only public college in the county, Collin College is a partner to business, government and industry, providing customized training and workforce development.  In addition, the college operates the Collin Higher Education Center, which serves 3,300 additional students each year in partnership with The University of Texas at Dallas, Texas Woman’s University, Texas A&M University-Commerce, Texas Tech University and the University of North Texas.
Top
Last Modified By: rmichael@collin.edu on 05/21/2018 6:19 p.m.  ©